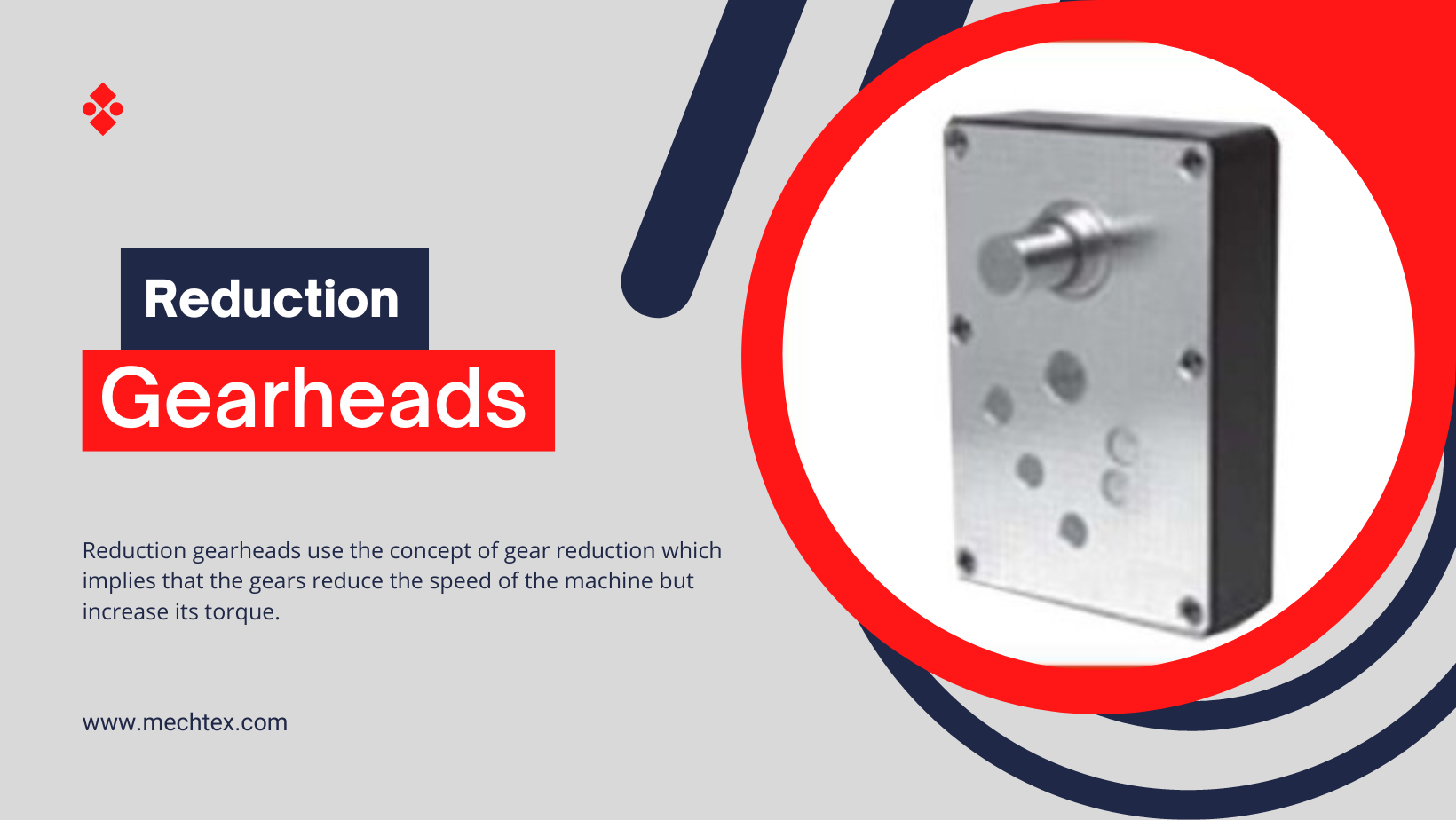 Reduction gearheads use the concept of gear reduction which implies that the gears reduce the speed of the machine but increase its torque. They are usually made of steel, hardened metal, nylon, plastic or rubber gear. The usage of sintered gears is also increasing to decrease the expense of gear production. These are self lubricating. They are available with a variety of mounting options, reduction ratios and output shafts.

The single reduction gearhead consists of one pair of gears. It consists of ports via which the engine and propeller shafts enter the arrangement. A small-sized gear, called the pinion, directly runs a gear that is connected to the propeller shaft.

The double reduction gearhead is mostly used in applications where very high speeds are required. In this arrangement, a small gear, called pinion, is anchored on the input shaft allowing a flexible coupling. The pinion is attached to an intermediate part known as the first reduction gear.

The magnetic reduction gearheads, also called magnetic gear reducers, can beneficially replace the conventional gear reducers to provide torque and speed control. This arrangement works on the principle of magnetic attraction instead of physical contact between the shifting components. Complicated assembly, lower torque and heavy weight have slowed the diffusion of the magnetic process.

The magnetic reduction gearheads eliminate the need to lubricate and hence have a low maintenance cost. Since there is no requirement for lubrication, the machines can run in an extreme temperature range of -200? C to 350º C. It is used in applications such as satellites and other aerospace instruments.

Since there is no physical contact between moving parts in this arrangement, there is an absence of friction. This not only eliminates wear but also has an appreciable effect on the life of the machine.

The parallel shaft reduction gearhead consists of a multiple gear assembly. This arrangement enhances the system reduction. The entire gear reduction ratio is defined by enhancing each gear ratio from every gear part.

If the pinion and its anchoring part have the same number of teeth, then reduction does not take place. In this case, the gear ratio is 1:1. The gear is used as an idler whose main function is to change the rotation direction and not decrease or increase the speed or torque, respectively.

Following components are used in the parallel shaft reduction gearhead :

The right-angle worm reduction gearhead depends on the count of teeth on the mating worm wheel and the count of threads or starts on the worm.

The efficiency is mostly dependent on the number of trains. It is a mean value that is measured at a surrounding temperature of 20º C to 25º C. A newly bought gearbox will show lower values. These values will however reach the normal values post the run-in period.

The peak torque offered at stall is referred to as maximum static torque. The value of torque beyond this limit may destroy the gearbox.

The maximum recommended input speed has a great impact on the noise level and the lifetime of the gearhead. Depending on the application, it should be taken into consideration while deciding the reduction ratio.

Backlash is the angle that a gearhead output shaft can rotate freely with a blocked input. It occurs mostly due to gear play which is necessary to avoid jamming. It can also occur due to shaft play and elastic deformation of the teeth and shafts under load.

The gear operation is noisy.

They are not favourable for greater velocities.

They are not favourable for transmitting motion over a large distance.