Both brushed and brushless DC motors can be operated as generators. However, there are some important points to consider when designing the drive.

Every now and then, I’m asked about the suitability of maxon DC motors for the use as a generator. Since our motors are very efficient, this is also true when operated as generators. The basic calculations between speed and voltage as well as current and torque are very simple. In the following, a few rules for a successful selection.

Many generators are operated at speeds of 1000 rpm or below. That’s quite a low speed for small motors. Generating 10 V or more at 1000 rpm requires a speed constant of only 100 rpm/V or less. Such windings are hard to find in the maxon portfolio. There are only a few high resistance windings on larger motors that satisfy this requirement. Smaller motors have higher speed constants. 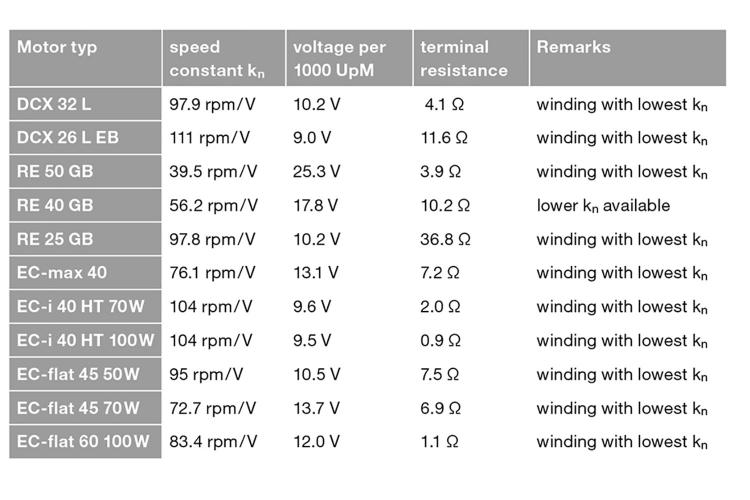 Table 1 shows a selection of motors with low speed constant (or high generator constant = generated voltage per speed). Usually, it’s the motor winding with the highest resistance only that results in a speed constant of less than 100 rpm/V.

Rule #2: Without considering the load, the winding should have a speed constant of kn < n/u   or smaller. As an alternative, the motor speed can be enhanced by the use of a gearhead (see below).

Rule #3: For stable output voltage over a certain load range, select rather a larger motor where the resistance is lower even on motors with high generator constant.

The EC-i 40 High Torque motors are very interesting from this point of view.

Do not select the motor-generator on power considerations alone. In order to fulfill the torque requirements, you might need a motor with a much higher power rating than the generated power; in particular if the generator speed is rather low compared to typical motor speeds.

The amount of torque on the generator defines the size and type of the motor-generator. Select a motor type with a continuous torque higher than the generator torque.When calculating the torque or current load, consider the type of operation. Will the generator run continuously for long periods of time, or in intermittent operation cycles, or during short intervals only? Accordingly, a motor size with sufficient continuous torque or current has to be chosen. Also respect the maximum speed of the motor type. However, due to the generally low speeds this is hardly ever an issue.

The most appropriate winding of a given motor type follows from the current and generated voltage requirements. Select a winding that can generate the required voltage U even under load. Assuming a fixed generator speed n, we require a generated voltage of the winding Ut that is larger than U

Without considering the load, select the speed constant according to Rule #2, i.e. a winding with a sufficiently high resistance. Since the current capacity decreases with increasing resistance, verify that the continuous current is still large enough.

The chart quite nicely shows the ambivalent effects of different windings.

These contradictory effects can be eliminated to a certain extent by selecting larger motors that exhibit lower resistances for the same generator constant (according to Rule #3). 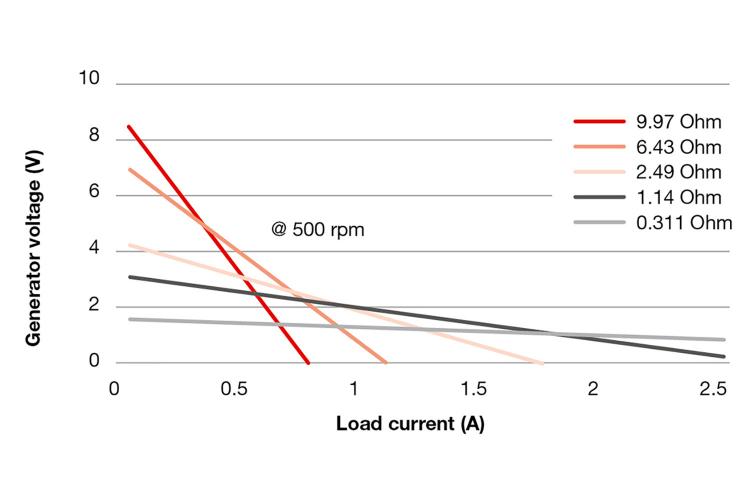 The voltage-current lines of the different windings of the RE 40 with precious metal brushes at 500 rpm. Observe the different slopes of each winding.

Rule #4: Use gearheads to increase very low speeds. However, maxon gearheads are not really good in being driven from the output. Use gearheads that can be back-driven, i.e. planetary gearheads up to two stages or spur gearheads. (Or specially designed gearheads).

The reason for using gear-motor combinations is the very slow driving mechanism in generators; e.g. driven by a wind or water turbine or even by hand. A few observations and recommendations:

Rule #5: For DC tachos, use DC motors with precious metal brushes that suit better the small currents. Select the winding according the required tacho voltage and the speed range in your application. Don’t worry about the winding resistance, just make sure that there is a load resistance of several k? to keep currents small. 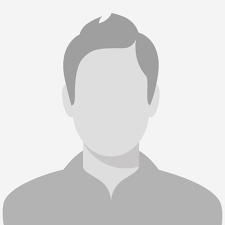